The once-a-decade process of redrawing district boundaries for state and federal lawmakers may seem like an impersonal game of numbers to achieve a political goal, but not to Edward Sienkiewicz.

At town hall sessions held across the state in recent weeks, many Georgians implored lawmakers to create fair maps, consider the state’s increasing diversity and commit to a transparent process that is accessible to the state’s 10.7 million residents.

But Sienkiewicz, a retired Air Force lieutenant colonel who lives in Bonaire, had a more specific request for the residents of his neighborhood, which sits on the edge of House District 144: that they be returned to the same boundaries as their fellow Houston County voters.

“The vast majority of folks in this small slice of Houston County — and I’ve talked to many of them that are currently in Georgia 144 — have interests directly tied to Robins Air Force Base and Houston County, not — and I emphasize not — to the much more rural counties to our east that make up the great majority of Georgia 144,” Sienkiewicz said at a town hall in Macon.

As the U.S. Census Bureau is set to release the population data needed to make changes to political legislative boundaries later this week, concrete comments about specific district changes from Georgians such as Sienkiewicz were few and far between at the public sessions convened by the legislature.

GPB News and the Georgia News Lab transcribed more than 18 hours of public comment offered by 289 people at 10 hearings across the state and online to track what Georgians are asking for in the mapmaking process.

Fairness in the mapmaking process was the most common request during 18 hours of public comment during legislative town halls in recent weeks.

Nearly 60% of the speakers called for fairness in drawing maps and 44% asked for more public input into the process. About 40% called for increased transparency, including public release of proposed maps and all of the information used to draw them.

“A fair and transparent process for drawing district lines is critical to the democratic process,” Watkins said. “Citizens should choose their representatives, not the other way around.”

So far, 289 people have given 309 public comments at the virtual and in-person hearings, with another meeting planned for Wednesday in Augusta. About 54% of the comments came from members of the public, 41% came from advocacy groups and the rest were public officials speaking on behalf of their constituents. 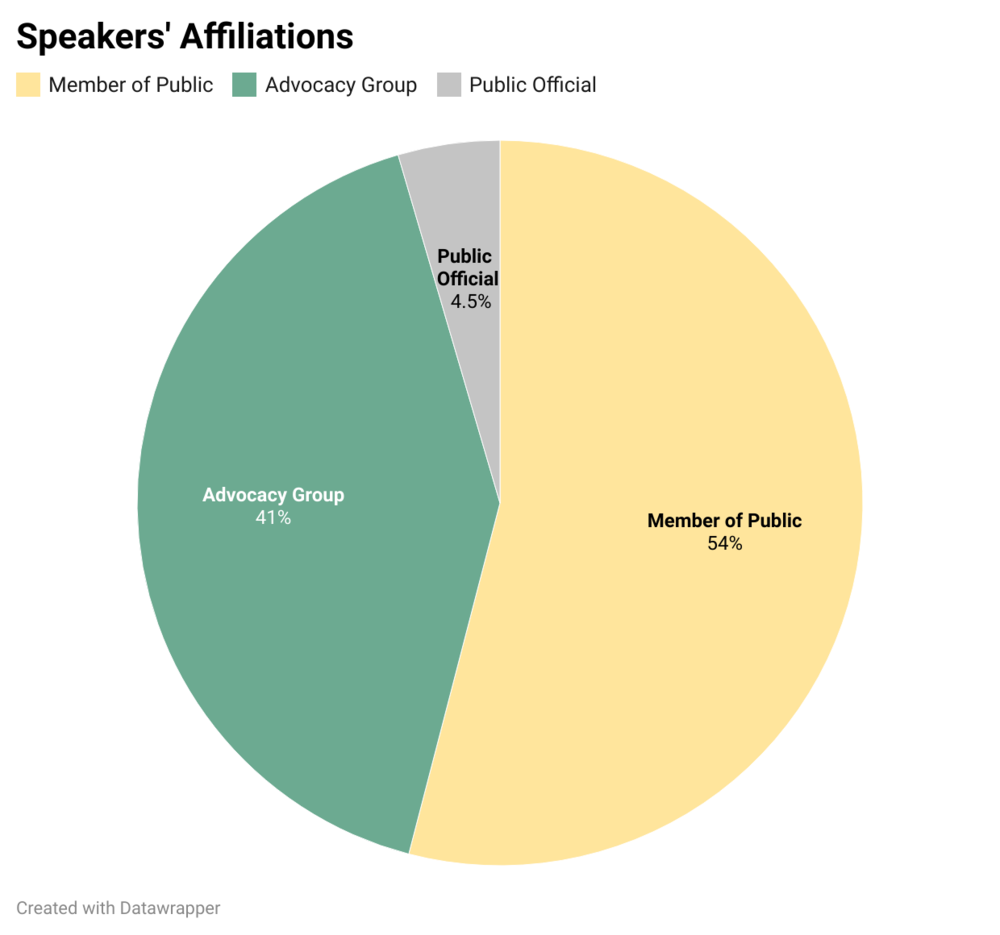 A majority of the public comments made at redistricting town halls held by lawmakers were members of the public.

As the demographic and populational power shifts towards metro Atlanta, rural Georgians such as Buena Vista Mayor Kevin Brown reminded the House and Senate redistricting committees to keep those smaller areas in mind.

Sometimes the voices of smaller cities and counties are split among multiple representatives, as with Tifton and Tift County in South Georgia.

“We would very much like to have our county and our city restored to a single representative district,” Tifton resident Mark Hall said at the Macon hearing. “We are currently split between three districts in the state house: not only our county of 40,000, but our city of 15,000. That seems excessive for one small community.” 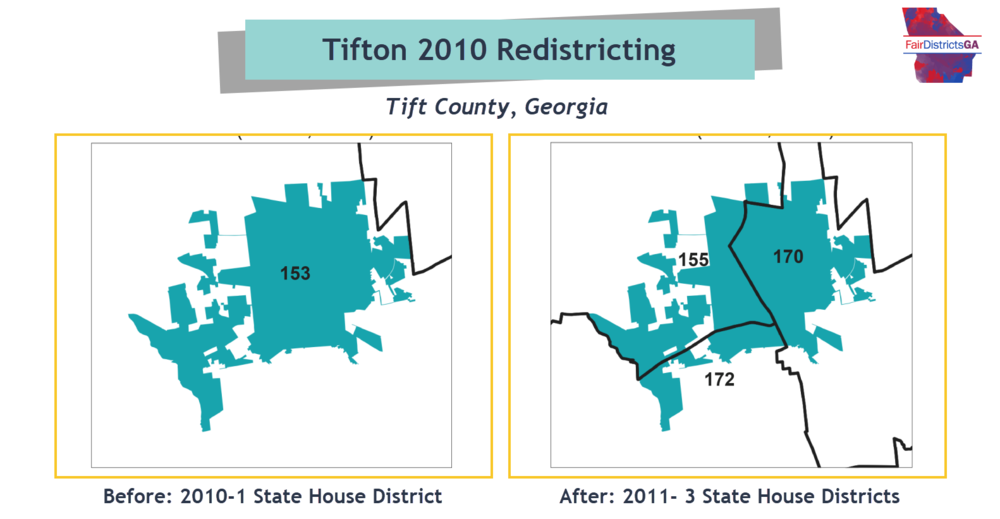 The city of Tifton is one of many Georgia cities split across multiple state House districts after lawmakers gerrymandering boundaries.

The nonpartisan redistricting group Fair Districts GA estimates that two-thirds of small cities in Georgia are “cracked” into multiple state House districts, from Waycross split into four districts to Lawrenceville, which is divided among six representatives.

Many of these areas did not have strong representation during the last redistricting process, diluting their ability to advocate on their own behalf, as Bibb County resident Carolyn Hargrove explained at the Macon town hall.

“Macon-Bibb County, with a population of over 153,000, is currently drawn into five separate state House districts,” Hargove said. “This has the effect of dividing our community and diminishing our strength as a whole in addressing common problems.”

Hargrove said that most of three of those districts lay in counties outside of Macon-Bibb with their own needs and agendas. 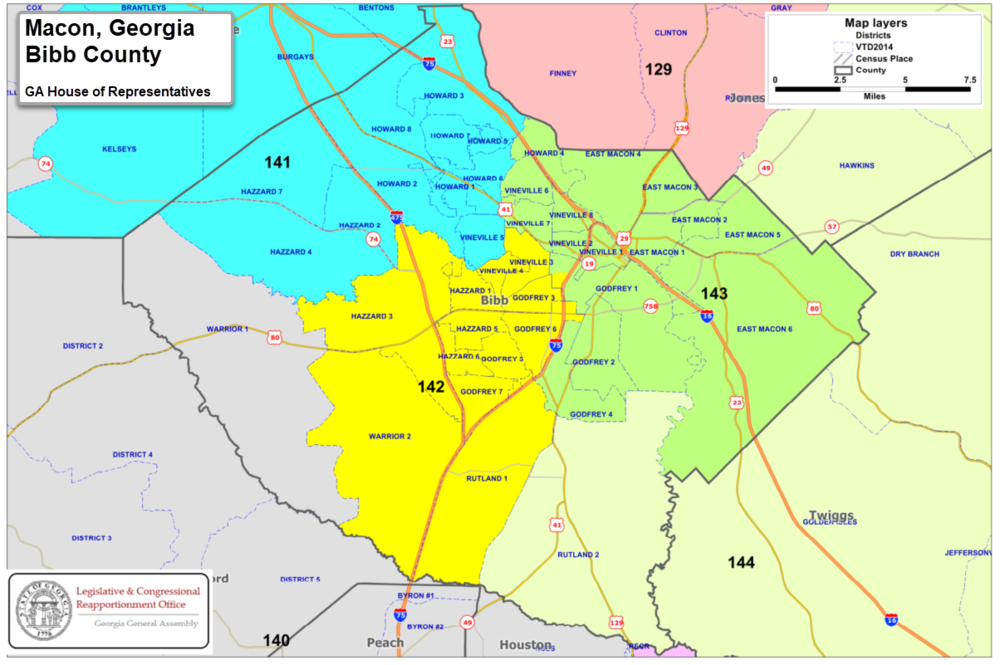 Macon-Bibb County is represented by five different state House districts, three of which are primarily based outside the county.

At the Athens town hall, many of the speakers called for lawmakers to change Athens-Clarke County’s boundaries to reflect the area’s heavily Democratic politics. Critics say because Republicans controlled the last redistricting process, only one of the three state House districts in the county is held by a Democrat, and both state senators are Republicans.

“As a mathematics educator, I wanted to point out some numbers that really do point to where Athens-Clarke County is — a metropolitan urban district,” he said. “Please, do the math.”

More than a third of speakers discussed possible alterations to district boundaries, with 75% of those asking for a change. Others called on the committees to preserve existing lines, such as residents in Toombs and Montgomery counties along Interstate 16.

“There are too many good things going on that we’ve had happen and we are really working and striving together,” Betts said. 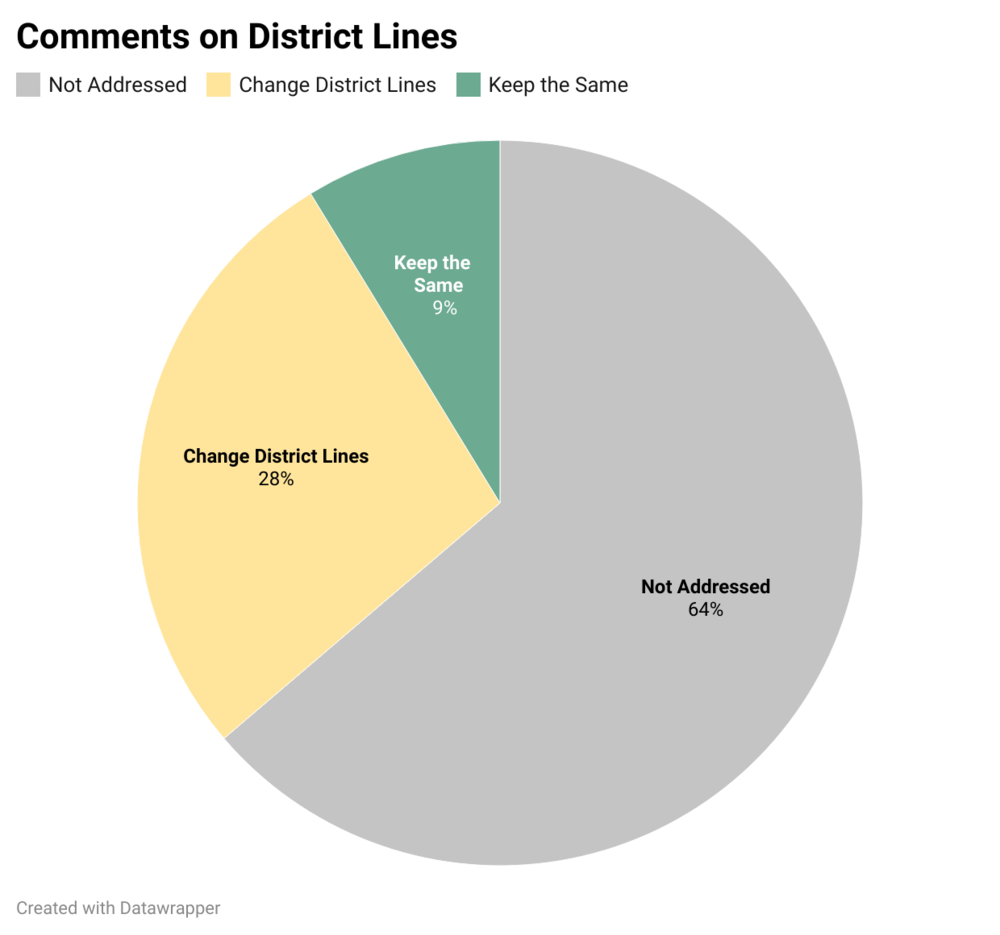 While the vast majority of public commenters did not discuss specific district boundaries, the ones that did primarily wanted lines to be changed.

“We’ve been building a network in District 153,” Bryant said. “It would be very, very tragic if our community was divided … Let’s keep us together the way we’ve been working hard to connect and unite with each other”

In Northwest Georgia, several speakers at the Dalton town hall asked to be kept in the 14th Congressional District represented by Rep. Marjorie Taylor Greene, citing shared values. Some speakers from neighboring districts asked that their communities be drawn into Greene’s jurisdiction.

In all, about one in three comments made throughout the town hall process mentioned preserving shared values and political views as a reason to change or keep boundaries, along with race and ethnicity in a fast-changing state.

Jexandria Dominique Prince, a nurse practitioner, said in the second virtual hearing that Georgia’s large Black population and growing nonwhite population should be fairly reflected in the new districts drawn later this year.

“Like my ancestors, we are the gatekeepers for this next generation,” she said. “Change is coming. Equality is coming. We must work together to represent the diverse history of Georgia and its people, so that it includes every Georgian’s American dream.”

Republicans control both the House and Senate as well as the governor’s office and will dominate the redistricting process set to begin later this fall. Lawmakers have not committed to further public hearings once initial maps are proposed and have said details about the rules governing the mapmaking process will be released only after a special legislative redistricting session is underway.

Stephen Fowler is an award-winning reporter and photographer for GPB News covering state and local politics.

Sherry Liang is an intern reporter for the Georgia News Lab and Georgia Public Broadcasting.