After cancellations, many Georgia voters re-registered and voted

Home News After cancellations, many Georgia voters re-registered and voted

POLITICS
By Mark Niesse, The Atlanta Journal-Constitution
June 28, 2021
Nearly 44K cast ballots in fall after losing their registrations in 2017
When Georgia canceled over 534,000 voter registrations in 2017, Joyce Bailey of Snellville was among those swept up in the largest removal of inactive registrations in U.S. history.
But Bailey, who works in a metro Atlanta school system, was able to restore her registration and vote in the 2020 presidential election.

Bailey is one of nearly 44,000 voters who lost their registrations four years ago but re-registered and cast a ballot in November’s election, 8% of those who had been canceled, according to a comparison of cancellations lists and voter history data by The Atlanta Journal-Constitution.

As Georgia election officials plan to cancel 102,000 registrations this summer, Bailey’s experience shows how registration cancellations, called voter “purges” by their critics, take away the ability to vote but aren’t necessarily permanent. Eligible voters who realize they were canceled can re-register and vote. Those who don’t re-register would be left out of elections.

“I wanted my voice to be heard and my vote to be counted. I thought it was time to get a new change,” said Bailey, who previously hadn’t voted since 2008. “I did not vote for a while, so I did register.”

Voter registrations can be canceled in Georgia after voters move or don’t participate in elections for several years. Cancellations occur every other year as required by Georgia law to remove ineligible or infrequent voters, an effort to keep up-to-date voter lists.

Some of those who re-registered after 2017, such as Bailey, were removed under Georgia’s “use it or lose it” law. Under the law, voters are labeled “inactive” if they fail to participate in elections for five years, then their registrations are voided if they miss the next two general elections. 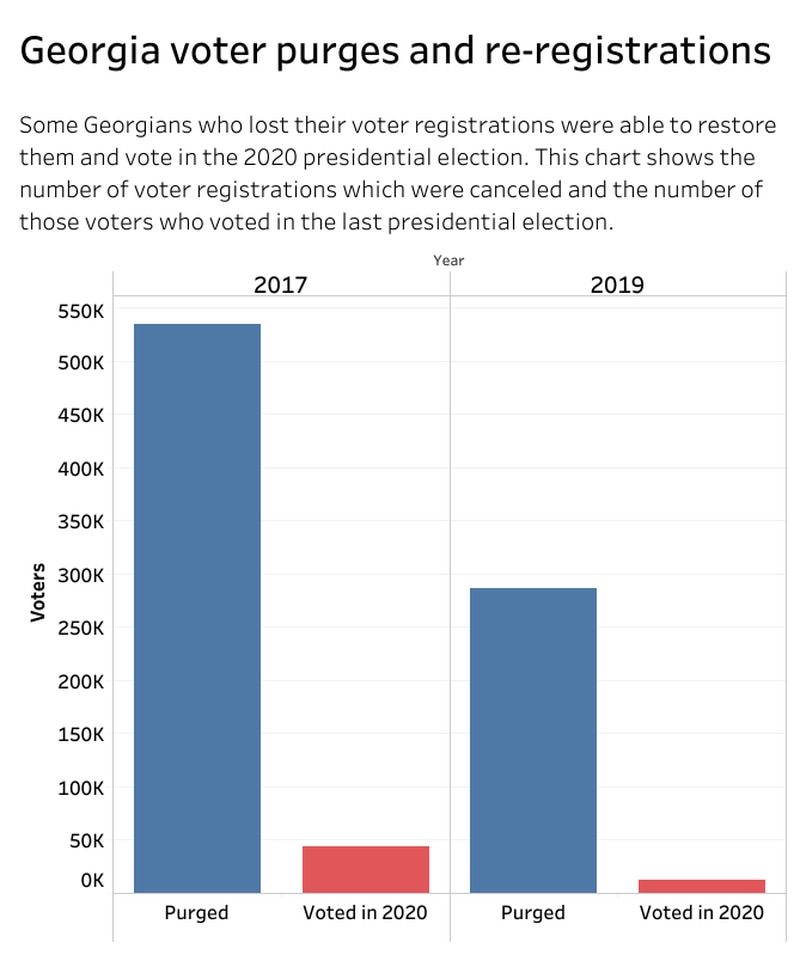 Other voters were initially canceled because they had moved to a different county or state, and then they re-registered in their new county or after moving back to Georgia. Voters are automatically registered to vote when they obtain a driver’s license in Georgia, meaning some might not have realized their registrations were canceled and then reactivated.

Election officials mail notifications to voters before their registrations are canceled. Afterward, it’s up to voters to check that they’re registered on the state’s My Voter Page.

In addition to the 44,000 who were canceled in 2017 and later re-registered to vote, 12,000 other voters who were removed in 2019 also re-registered and cast ballots last fall, according to the AJC’s analysis. The 2019 registration cancellation process was smaller, affecting 287,000 registrations.

Those who re-registered to vote after previously being canceled are eligible Georgia residents, and there’s no indication of any fraud. They signed up to vote through the Georgia Department of Driver Services or by filling out voter registration forms.

Federal law requires states to remove ineligible people from voter rolls, but Georgia’s voter registration cancellations go further by canceling registrations of people who have chosen not to participate in a few elections or whose election mail was mistakenly returned to sender, said Saira Draper of the Democratic Party of Georgia.

“We have seen countless examples of voters mistakenly slated for removal from the rolls even though they are eligible to vote at their address,” Draper said. “The secretary of state should be less eager to remove voters from the rolls and more helpful in getting eligible voters registered.”

“The voters don’t live here anymore. We know that,” Raffensperger said. “But instead of doing this on a monthly basis, you can only do this in non-election years because of the federal laws.”

A federal judge recently upheld Georgia’s “use it or lose it” law, finding that canceled voters aren’t significantly burdened because they can re-register to vote, as Bailey did.

The AJC’s review of those who re-registered and then voted in November’s election didn’t find significant racial, age or geographic disparities in comparison to those who were originally canceled in 2017.

The rates of those who re-registered and voted generally align with population, meaning most of these voters live in the state’s largest counties that generally support Democrats: Chatham, Cobb, DeKalb, Fulton and Gwinnett.

In all, over 107,000 voters whose registrations were removed in 2017 have re-registered to vote in Georgia — 20% of the cancellations. Most of them didn’t vote in November. It’s unknown how many of those who didn’t re-register to vote moved away or simply decided not to vote.

The secretary of state’s office sent notification letters this month to voters whose registrations could be canceled this year, giving eligible voters an opportunity to prevent their removals. If voters re-register to vote within 40 days, their registrations will remain active.

44,000: Voters in the 2020 presidential election whose registrations had been canceled in 2017

12,000: Voters in the 2020 presidential election whose registrations had been canceled in 2019

102,000: Voter registrations planned for cancellation this summer. These voters haven’t participated in elections for several years, and none voted in the 2020 presidential election.